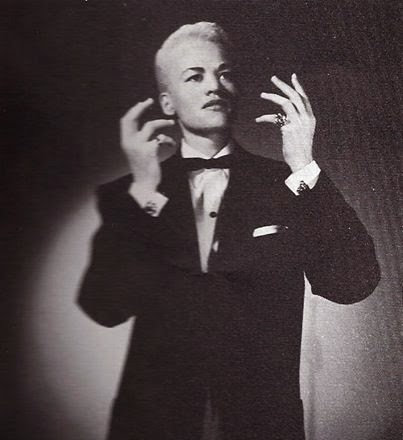 Stormé DeLarverie passed away just a few days ago on Saturday, May 24, 2014 at the age of 93. Hers should be a name that flows easily from the mouths of both young and old, yet is in danger of fading away in obscurity. Sharing her story is my honor as I kick off Pride Month.

"It ain't easy being green, sho'nuff!", she's say once in a while. Born in 1920 in New Orleans, her father was white and her mother was a black servant in his house. While they continued living in Louisiana where interracial marriage was illegal, she remembered her mother being well supported. Later her father and mother moved to California and were married.

Stormé stated in interviews that she started singing in her teens, first as a woman and later dressed as a man. She traveled in a jazz band to Europe, with a rich baritone voice that lead her eventually to a career as MC of the Jewel Box Revue, a racially diverse drag show that she hosted from the mid 1950s into the 1960s. Tall, talented, and very handsome, she was the only drag king among a bevy of beautiful drag queens.

She'd told friends there was a period of time when she worked as a bodyguard for several Chicago gangsters. It is well known that during the time period she describes, mobsters and mafia often ran bars that catered to an 'unusual' clientele, sometimes the only gathering places for people who identified as other than straight. The bars' owners paid regular bribes to local police forces, and put up with the occasional raids to harass and arrest LGBT patrons so certain politicians could whitewash their records before elections.

It was during such a raid on the night of June 27, 1969, that Stormé DeLarverie kicked off perhaps the most significant riot in the history of gay rights. She was at the Stonewall Bar, which no one disputes. Later that night, standing outside the bar and about to be arrested, a cross dressed lesbian (woman dressed as a man) was manhandled by the NYPD and pushed/hit back. The cop landed on his butt, and the riot began in earnest. Many maintain that lesbian was Stormé, and her close personal friends say she admitted to them she'd done it, but others dispute her claim.

One way or the other, it is a fact that she spent decades patrolling the streets of Manhattan, tall, androgynous, and armed with a knife or gun. Ever vigilant, trouble in the form of baiting and bullying, intimidation and humiliation (which Stormé called 'ugliness') had a way of disappearing when she walked onto the scene. Her presence was intimidating, but her love for the gays and lesbians on her streets was boundless. No one was going to hurt her 'baby girls', a term of endearment  she used for young lesbians.

Personally, I'd heard through the grapevine (can we call it oral tradition?), that there was a lesbian who started the riot, fanned the flames in the following days, and later patrolled the area to keep other gays and lesbians safe. She was said to dress like a man and to fight like a man, but she was all woman. I choose to believe that was Stormé DeLarverie.

Listen to an interview she gave a few years back. In the background you'll hear her still singing at the age of ninety.


Rest in peace, Stormé DeLarverie, and thanks for your service. I'm sorry I didn't know your name until you died, but I won't forget it, or you, warrior woman.

Read more about Stormé  DeLarverie's life and death by following these links.

The Advocate
Huffington Post
New York Times
Posted by Unknown at 8:00 AM