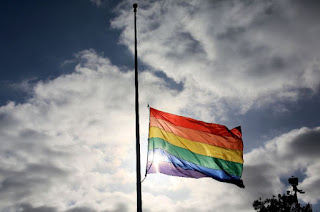 It's been a hard couple of days, I won't lie.

There are the inevitable questions: Why there and then? Who was really behind it all? What made him do it? And while there are answers, they won't satisfy, because there are no answers good enough to make up for the sickening horror, pain, and devastation.

Time does strange things when you're grieving. Two days can seem like a week, and hours can disappear in the blink of an eye. The heaviness I carry around makes me tired without having done anything. Fighting despair is apparently exhausting.

Friends have put up heart-warming posts on Facebook telling me that it's okay to grieve and feel bad, passing along celebrity reactions to the horror, wise and witty memes to distract, and doing what we ALWAYS do when attacked as a group; bucking each other up. Even one of my white, straight, cis-gendered male friend (35 years my junior to boot) reached out to tell me he valued me as a person and a friend. My mother sent me a text telling me she thought the massacre was horrific.

And although all of that helps, none of it makes the fear go away. It's easy to say that we must answer hate with love, that our Pride counters his cowardice, and that just keeping on keeping on is enough. But it's a lot harder to ignore the gut-gnawing fear that swam into my belly as I realized that I'm suffering a kind of PTSD, born of the many times I've reacted to the number of attacks in our history. There have been so many, too many, over the years and like an overstretched rubber band I'm finding it hard to bounce back.

Still, Barack Obama, George Takei, and dozens of others have soothed my ragged nerves some with their balm of rational concern. It will take time (which may pass quickly, or not, depending), but eventually I will carry on again, if not calmly, at least with hope for a better future.

The bastard may have scared me, but not witless. As long as I have a brain, and I can express myself through words, I win.