Oh My Dear, #WisCon Was A Blast! 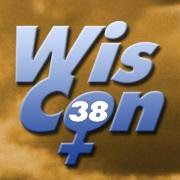 I'm so sorry I'm a day late in posting this week. I spent the long Memorial Day weekend at a fabulous convention for feminists and science fiction aficionados in Madison, Wisconsin. I'm sure WisCon will feature heavily in my blog posts for awhile, because I met wonderful people and was given so much to think about it will take months to filter through the old brain-pan.

This was the 38th year of WisCon, and I'm very sorry that I'm missed the last 37. Just imagine how much further I'd be along the road of writing if I'd attended every one! It boggles the mind.

Much of the conference centered around the reality of privilege, how to recognize when you have it, what steps you might take to counteract the effects of privilege, and how to be a constructive ally to those who are oppressed. It was most interesting to realize that most of us fit somewhere up or down the ladder of privilege. More on that in the next few days, I promise!

Tomorrow I will post another short short story, because I'm preparing a special post for Pride Month, which as everyone in the entire frickin' world ought to know by now is JUNE. Some celebrate the last weekend in the month, others choose to celebrate during the early part of June, and then there are those of us who celebrate the WHOLE month:

I wrote this several years ago in response to a woman's original post on Facebook, and her follow up response to me. To protect her privacy, I've omitted her name and words, but I'm sure you'll get the gist.


D., I'm so sorry that you feel this way. I've known you as a FB friend and Farm Ville neighbor. I believe you to be a good kind woman, and I'll miss you.

But I am a lesbian in love with the finest woman I have ever known. She and I share two daughters, and four grandchildren. We are normal people, just like you. We go fishing, mow the lawn, take care of our family and house, pay our taxes, bury our dead and celebrate our births. We go to church, read ourselves to sleep, bake food when someone's ill, visit with the neighbors, and shop in local stores.

You're choosing to follow the teachings of your church - not your religion. Your family is Christian, and my family is Christian. Your church teaches one thing, ours another. Yours teaches exclusion, ours inclusion, yours will tolerate a penitent sinner, ours doesn't offer mere tolerance, but total WWJD acceptance. We choose our religions, and our churches. I never chose my sexuality, I was born this way.

Your choice to help maintain the inequality between heterosexuals and gay folks is a deliberate choice to make me and my family 'less than’ you and your family, separate from you and yours. But separate is never equal D. And your choice to support inequality is a clear decision to continue hurting my family.

We are American citizens, and as such we are GUARANTEED equality under the law. Since you choose to ignore our Constitutional rights and our very real needs as a flesh and blood family filled with hope, love, and laughter, I will delete you as a friend after giving you a chance to respond to this post.

I wish you well, both you and your family. May you never, ever, have to watch one of them suffer being a second class citizen in his own country, the land of his birth.

And I just have.


Ah, D. See? I knew you were a good kind woman. I've just been able to feel that about you since I've known you.

The problem is choice. You believe the idea that every single gay or lesbian has chosen to become one. I know that isn't true. I know for a fact that some of us were identifiably gay before we even learned to talk. And others of us have been so terrified by beliefs such as yours that we deny the truth even to ourselves for many many years. But we are as God made us, and eventually we find the path He chose for us. If we're lucky He helps us find a soul mate to make a home and family with.

I wonder just how many close friends you have that are either gay, lesbian, bisexual, or trans. I'm pretty sure you have identified a hair dresser or two, but I doubt you're friendly enough to really know their lives, their partners, their families. I think it's much more likely that you've been told by someone, or the TV, or you heard a story from somewhere, and most likely a combination of all three about people making the 'choice' to be gay or lesbian. Because D., as I think we both can agree, I live in and among a LOT more LGBT folk than you do and I'd say at least 95% insist, as I do, that we had no choice. My sexual orientation was mine at birth, just as yours was. And after years of self-loathing, doubt, and fear I found a welcoming church of Lutherans who helped me understand more about just who I am, and where I fit in God's plan.

Biblical interpretation is a fascinating topic. Your church's ministry obviously focuses on the Old Testament which is filled with various abominations that most of the civilized world no longer fear, such as raising two crops side by side in the same field, or touching the skin of a pig, or eating shellfish. I don't for a moment think that your church condones execution for insolent teenagers, or forcing a woman who's just given birth to stay in her home for weeks. You've stopped focusing on those commands of the Old Testament, and don't give a moment's thought to enforcing them. But you do focus on this one, ancient command to despise gay men. The Old Testament were the laws we followed before Christ's birth, when we were still Jews. The New Testament gives us His life, and His words to follow. You ignore the fact that Christ Himself said not one word against gays or lesbians in the entire New Testament.

My church's ministry focuses heavily on the words of Christ, and following His commands to judge not, lest ye be judged, to give unto these, the least of Mine, and to do unto others as you would have them do unto you. My fellow Lutherans do not merely tolerate me as an unrepentant sinner, they welcome me in acceptance as one of God's children and help guide me in ways that celebrate the life of Jesus Christ. I won't be looking for any guidance from groups that refuse to recognize that I am as God made me, whole and complete. I've found a church that satisfies all my spiritual needs, and expands them.

In my eyes, that's not a very Christian attitude. I've been to churches like yours, was raised in one. Have you ever visited a church like mine? If not, please do. You'll be welcome! And maybe when you can love one of us in true Christian fellowship, the mote will fall from your eyes and you'll see the Truth that God doesn't make mistakes and has created a world with heterosexuals, and lesbians, and gays. Then you'll have to explain to Him just why you chose to discriminate against some of His children. But He'll forgive you when you're truly repentant, He always does!

I'm saying this next part gently, because I know you're a woman of good intent and I don't wish to offend you. But I will state my truths.

I will delete you as a friend, because I cannot continue to enrich your life in even the smallest way with my FV gifts and FB friendship while you actively seek to deny my family their basic civil rights. You're my oppressor, and I don't play games with people who are part of a majority keeping down a minority.

You might just as well pick up a spray can and decorate your garage door with: GOD HATES GENTA.

Goodbye D. - God's Peace be with you.